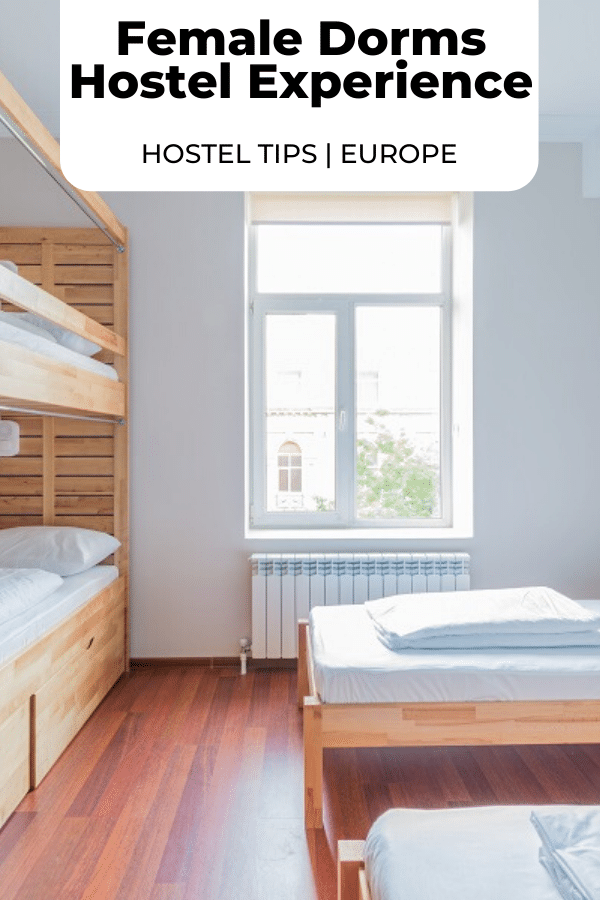 Traveling on a budget means cheap accommodation, which is why utilizing hostels is a great way to save money. Unfortunately, there are a lot of horror stories out there about hostels, and traveling alone might make them seem “unsafe.” But I can tell you hostels were the best decision I made traveling Europe solo!

Why I love Hostels for Solo Female Travel

In Europe, hostels are everywhere! Some are so nice they feel like budget hotels. I use the app hostelworld to book all my hostels when I travel. You can filter hostels to find the accommodations that matter to you like booking tours, breakfast, 24 hour reception, airport transfers etc.

You are also bound to meet like minded solo travelers staying at a hostel, since it’s one of the most popular ways to travel Europe. Plus, the people you meet are what make trips so memorable and transformative. I can tell you hands down the people I met in my hostels were the reason I loved traveling. Architecture, tours and scenery are great and all but the thing that makes travel so special is human connection. You’ll find that in a hostel!

Only Young People Stay in Hostels

Would you believe me if I said I met families, couples and people in their 60s staying in hostels? It’s true! Hostels work for all kinds of travelers. Some hostels are the stereotypical image of dorm rooms set up with bunk beds, but many hostels offer private rooms or rooms for two people etc.

They get cleaned and tidied up by a cleaning staff! I honestly was impressed with the hostels I stayed at, but of course, there are exceptions. However, for the ones I stayed at they were nice and clean 🙂 Plus, a lot of them have a unique sense of style, so they take pride in their appearance!

Read up on the location and most recent reviews of hostels you are considering. Honestly, I never felt unsafe in my hostel. If you’re worried about trusting people you just met with your belongings, I totally get that concern. It was one of my top worries too. However, I can’t express enough how the people I met in my hostel rooms were amazing! Most hostels provide small lockers, but you have to bring your own lock. I chose to not bring a lock and kept all my expensive belongings on me. You can wear a money wallet under clothing to hide credit cards and cash. I slept with my backpack that had my expensive things by the head of my bed and never had issues.

However, to be totally transparent, a girl in one of my hostel rooms had 600 euros stolen out of her locked locker…….yikes. Everyone in the room tried helping her out with back tracking her steps and concluded it was most likely someone on staff who picked her lock when they cleaned the room. This is one of the reasons why I prefer to keep my cards and cash on me. Also, I wouldn’t recommend taking that much out at once. I usually take out around 200 euros at a time. Just don’t let things like this stop you from staying in a hostel. The same thing could happen in a hotel or anywhere else!

If safety concerns are a big fear for you, I wrote a post with 9 tips for safety abroad as a solo female traveler that goes into more detail!

Advantages of Staying at Hostels as a Woman

Hostels will put on events specifically meant to help other travelers meet each other. In Croatia, my hostel organized a walk to a viewpoint in time for sunset with drinks and dinner afterwards. Tour agencies and popular sites and attractions will offer discounted tours to hostels, so I booked a lot of events through them. Plus, the people that work at hostels are great resources! Many times, they are travelers and may have even been traveling through and decided to stay longer than planned, so they signed up to work at the hostel.

The thing that lights my heart on fire about traveling is human connection. It’s the stories that are shared and created and universal connection that is born. I met amazing people in my hostels, and they’re the reason my travels were the bomb.com! I never once felt alone and almost always had plenty of new friends to share a meal with or go exploring. Although, enjoying a nice sit-down dinner with just myself is one of my favorite things, and I make sure to do it a few times each trip!

The Flexibility of Hostels

Let me tell you a story! During my first trip to Europe, my friend and I flew into Athens, Greece at 2am. We arrived at our hotel around 2:30am. Thankfully, they had someone at reception 24hrs…phew! But the problem was that the booking wasn’t for that night but the next night……opps!! Less than 24hrs in Europe, and we had already encountered our first problem haha! If traveling teaches you anything, it’s that you can figure anything out. And thankfully, we didn’t have to roam around the streets of Athens with our luggage. Instead, the receptionist was flexible and worked things out to get us a room that night.

Another story! The following year, I traveled Europe solo and arrived to Dubrovnik, Croatia from Split, Croatia. I made last minute plans to join two girls I had met in Split in renting a car to drive down the coast at sunset…..so worth it! But we lost track of time while we were swimming in waterfalls in Krka National Park and left wayyyy later than we thought!

This time, my hostel didn’t have 24 hr reception; reception left at 11pm. We weren’t going to arrive until after midnight. And I was going to a different hostel than the girls I was traveling with, but they made sure I safely made it to my hostel (fellow travelers have your back!) I was nervous I wouldn’t be able to get into my room, let alone the building! I texted the hostel before we left Krka, and they arranged things last minute to work out for me. The receptionist left the key to the hostel with a note that had my room assignment by the door, which was waiting for me when I arrived. The next day, I returned the key, and all was good!

Moral of these stories: Hostels won’t leave you hangin’! They know a lot of people are traveling solo and unexpected things happen, so they’ll work with you and be flexible.

Also, you can usually cancel your stay within a few days and get money back. I did this a couple times, but it does vary from hostel to hostel.

Why I Would Recommend Staying in a Female Only Dorm

While planning my first trip, I couldn’t decide if I should stay in female only dorms or not. After I read up on other people’s experiences, I decided to book majority female only dorm rooms. I did stay in a few co-ed rooms, but most were women only. Here’s why I think it made a difference:

No ear plugs can drown out a snorer when you’re literally 5 ft apart. I know girls snore too, but it’s less likely to happen in a female only dorms compared to co-ed ones.

Bathroom time is limited in hostels when you got one bathroom! So being able to change in your room when you’re in a female only room is super helpful!

I know some people who were the only woman in their room with a bunch of guys. This may not bother everyone, but it can be uncomfortable for some. I also met travelers that felt uncomfortable staying in a co-ed room because there was an older guy in the room and they were the only girl, which is again why I think female only dorms rule! Some hostels are starting to have age limits but not all do.

Totally a thing and can happen in any type of room, but it’s more common in co-ed rooms. So, if you’d rather not feel like you’re back in college with your roommate having their boo over, than consider a female only dorm. But know just because you stay in female only dorms doesn’t mean you’ll never get to meet guys. Do tours, other group activities and hang outside of your room and you’ll absolutely meet guys.

The Ease of Meeting Others

I found that I often met other solo travelers in my female only dorm, making it easier to connect with people and do activities together. However, I found it harder to get to know people in co-ed rooms. I talked with other women who found the same problem. We concluded it’s partly due to the fact that if guys and girls travel in a group, they get placed in a co-ed room. Already formed travel groups are just harder to chat up, not that every group is that way.

I hope this post answers questions you have about staying in hostels as a solo female traveler. I loved my experience in female only dorms but know co-ed rooms aren’t horrible! Travel is what you make of it, just like life! Female only rooms sometimes cost more (about $1 more per night but varies), so if money wise you’d rather save and book the co-ed rooms, you can still have an amazing experience! If you have any other questions let me know below in the comments!

How to Eat Healthy While Traveling!

Get my FREE 10 page guide to feeling your best on your next trip with travel advice, healthy eating tips & more!